Skip to main content
Skip to content Skip to search
You are using an unsupported version of Internet Explorer.
Parts of our website may display incorrectly or not work at all. Please consider downloading an up to date browser such as Chrome or Firefox.
Wealden District Council > Housing, Health and Advice > Housing > Housing Strategies, Policies and Plans > Affordable Warmth Strategy
Listen

Affordable Warmth Strategy 2018-2023 – A Strategy which aims to improve people’s health and well-being by keeping warm and well in the Wealden District.

Wealden is a rural district located in the middle of East Sussex and is one of four other local authorities in East Sussex including Eastbourne, Lewes, Rother and Hastings. Approximately 80% of Wealden is classified as rural and 60% an Area of Outstanding Natural Beauty (AONB). As of June 2016 there were 67,062 households with a total population of 157,575. The local economy is predominantly made up of micro businesses employing 0-4 people. 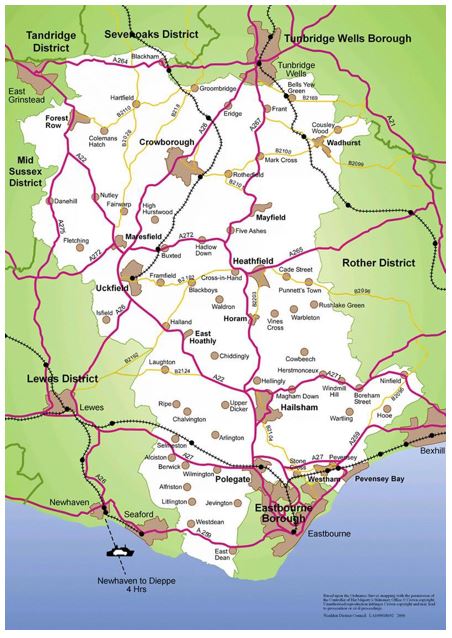 Some excellent work has been achieved in Wealden over the last 5 years and this strategy provides a strategic framework going forward to 2023; building on the good work we have achieved in the local area over the course of the last strategy. The key drivers of fuel poverty are income, fuel prices and consumption. The fuel consumption of a property depends on the lifestyle of the household and the energy efficiency of the property. The effects of fuel poverty can include:

This strategy aims to make affordable warmth available to all residents whilst also adopting a “worst first” approach in the work that we do.

In March 2015 the government published a new fuel poverty strategy for England (Cutting the Cost of Keeping Warm). The strategy introduced a new Low Income High Cost (LIHC) indicator that describes a fuel poor household as one which has “an income below the fuel poverty line and higher than typical energy costs”.

Under the previous strategy government adopted the 10% indicator. This defined a fuel poor household as one which “needs to spend more than 10% of its income on all fuel use and to heat the home to an adequate standard of warmth”. One of the weaknesses of the indicator included energy price fluctuation. This weakness was witnessed in large swings in the national fuel poverty statistics. For example, in 1996 there were 5 million households in fuel poverty. By 2003/4 this number decreased to 1 million and then increased to 4 million in 2009 despite investments in the housing stock through schemes such as Decent Homes and Warm Front. 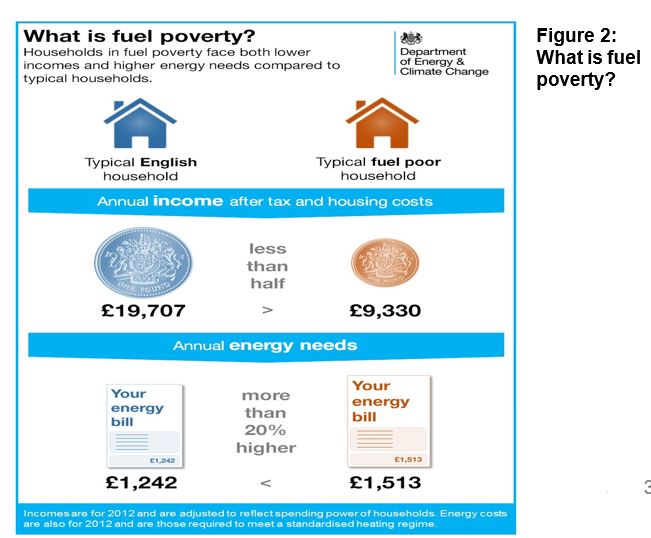 Through the Energy Act 2013, the Warm Homes and Energy Conservation Act 2000 (WHECA) was amended to bring forward a new legally binding fuel poverty target. The target aims to: move as many fuel poor homes as is reasonably practicable to a minimum of band C by 2030. A set of interim milestones provides a roadmap going forward towards the band C target as depicted in figure 3. Currently less than 5% of fuel poor homes in England have an energy efficiency rating of band C and above. 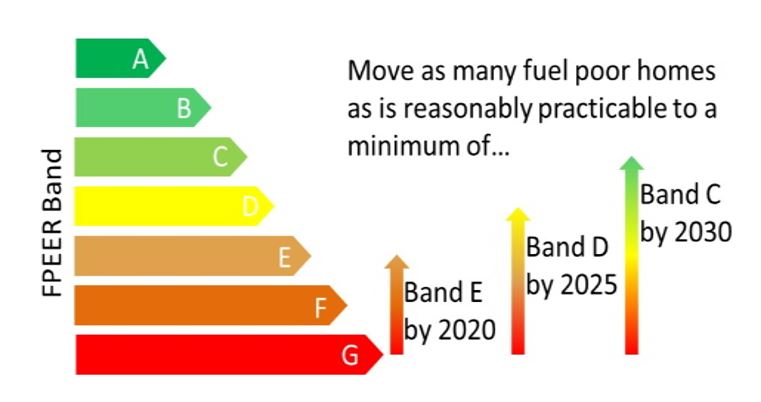 “Progress against the fuel poverty target is measured against the Fuel Poverty Energy Efficiency Rating (FPEER) banding. Similar to the Standard Assessment Procedure the framework is scored from 1-100 and rated A-G. The FPEER also accounts for the impact of fuel poverty schemes on energy costs”

Using statistical analysis on the annual fuel poverty statistics (for 2012) the strategy also provided some insight into who the fuel poor really are. Some generalizations were drawn:

There are a number of policy instruments aimed at tackling fuel poverty, reducing carbon and increasing energy efficiency. The table below provides a snapshot of the national fuel poverty landscape:

The Department for Business, Energy and Industrial Strategy (BEIS) release annual fuel poverty statistics. The annual statistics report for 2017 shows that 11% of homes across England were estimated to be in fuel poverty in 2015. This represents an increase of 0.4% from 2014 bringing the total number of fuel poor households to 2.5 million. The total cost of closing the fuel poverty gap is estimated to cost £884 million.

Figure 6: Average cost of closing the fuel poverty gap per the FPEER banding 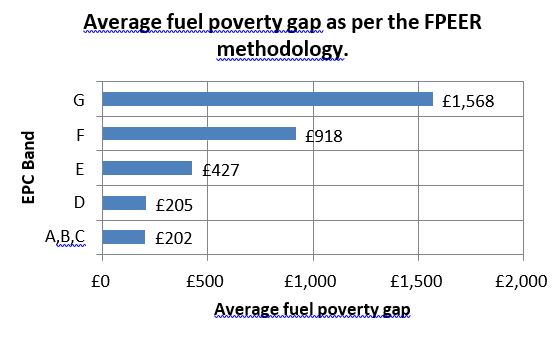 This strategy builds on the success of the last Affordable Warmth Strategy 2011-2016 and action plan to help achieve improvements to promote affordable warmth and reduce fuel poverty for the residents of Wealden. The strategy and action plan focusses on practical action and partnership working between the Home Energy Efficiency Officer, Wealden District Council, health organisations and voluntary and community sector organisations. Under the Home Energy Conservation Act 1995 each local authority submits reports on a two yearly basis setting out the energy conservation measures that the authority considers practical, cost effective and likely to result in a significant improvement in the energy efficiency of residential accommodation in their area. These reports are published on the Council’s website www.wealden.gov.uk .

£125,000. This resulted in 230 homes receiving energy efficiency advice, an EPC assessment of the property and where required loft and cavity wall insulation accessing ECO funding where eligible.

A rural insulation project across hard to reach communities which resulted in nearly 800 rural households getting free insulation through the Carbon Emissions Reduction Target (CERT) programme.

The measures were delivered on a “heat first insulate second” principle with measures aimed at those suffering from the effects of living in a cold home.

A rural energy project funded by Smart Energy GB and delivered across rural communities in Wealden in the format of a roadshow. The project aimed to increase smart meter awareness. The project was run in co-ordination with the Big Energy Savings Network (BESN) and Citizens Advice. Approximately 500 residents received face to face advice delivered at 11 local events on general energy awareness, bill checking and the benefits of smart meters

We have delivered 3 Pop Up Energy Shops. The most successful was held in Hailsham in 2014 which saw over 400 people visit the shop and get free energy saving advice.

A grant funded pilot delivered by Citizens Advice to trial and test a central point of contact fuel poverty service across rural Wealden. During the winter of 2016/17 the following outcomes were delivered:

A DECC funded heating programme which saw heat pumps installed into 157council properties to provide whole house affordable heating systems. The council have conducted home visits to all heat pump homes to make sure those living with the technology reap the benefits.

Solar PV and Light Emitting Diode (LED) lighting installed into 9 sheltered housing schemes. This has reduced electricity consumption by 50-70% in the communal supply.

Datasets can be useful tools to help inform strategies and action plans. Care should be taken when reviewing data as limitations apply:

Figure 9: Bar graph showing the number of properties in Wealden per EPC band. 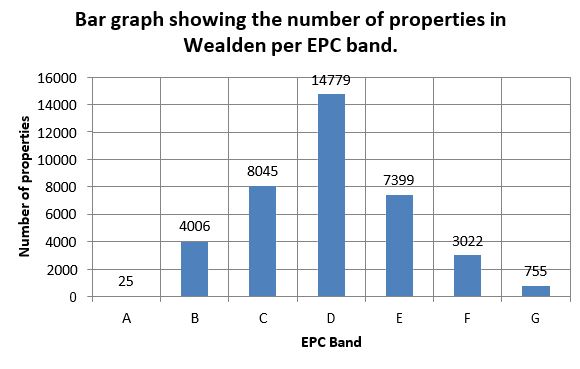 The bar graph shows that 9.93% of properties listed on the EPC database are poorly rated F or G. Of the entire stock 19.45% have an E EPC rating and 38.86% have a D rating. In comparison 31.75% of the stock have an EPC rated A, B or C. It can be argued that the greatest challenge lies in closing fuel poverty gaps in F/G rated homes because the fuel poverty gaps are larger.

Estimated cost of closing the fuel poverty gap in Wealden

Fuel poverty in rural areas such as Wealden is exacerbated by the high number of non-traditional construction and solid wall properties and the fact that geographically 80% of the district is off the mains gas network which equates to nearly 30,000 homes having no access to mains gas. This coupled with asset rich but cash poor residents and hard-to-treat homes increases Wealden’s standings in fuel poverty tables. Without access to gas or renewable technologies, rural householders tend to rely on electricity, LPG, oil or solid fuels for heating.

Statistical evidence from the government’s national fuel poverty statistics (2017) suggests that rural fuel poverty is linked to rurality and access to mains gas. For example

One of the key barriers preventing rural fuel poor household’s access mains gas and reducing the depth of fuel poverty includes the high cost of getting gas connections. Alternatively, and as identified in the governments new fuel poverty strategy, installing simple measures for the first time, such as central heating or loft and cavity wall insulation can increase thermal comfort and help fight fuel poverty.

It is recognised nationally that it is common to observe large fluctuations in EWDs for which trends over time are often not smooth. For this reason a five- year moving average is used to smooth out any short-term fluctuations and make the trend over time clearer. Overall, historical trends in EWDs in England and Wales show that the steady decline in EWDs since the 1950 to 1951 winter period has levelled off in recent years, with the most recent estimates more consistent with a slight five-year average rise since 2012 to 2013. EWDs levels are also influenced by the temperature and influenza incidence. The number of EWDs in 2012/13 was the lowest number since records began in 1950/51. This was attributed to the temperatures in December and January remaining over 2 degrees higher than the five year average. The peak in EWDs that was observed in the 2014 to 2015 winter period was attributed to a predominant strain of flu.

Service delivery in the Wealden area: 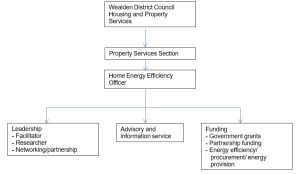 Wealden maintains close working relationships with a number of public, private and third sector organisations to make sure affordable warmth is available to all residents. Our current partnership base includes:

We are looking to broaden the number of partners we work with to help tackle local poverty more effectively.

Key areas the action plan will focus on for the next 3-5 years are: